There is technically no such thing as the Hard Boiled Egg Diet, well at least there is no book on it. There are though a number of egg based diets that have been published on the internet.

Egg diets tend to be high protein low carb diets which can be useful for short term weight loss, but not long term. One of the most well known egg based high protein diets is the egg grapefruit diet which combines both protein and grapefruit to burn fat fast, or so it’s claimed.

The hard boiled egg diet came to prominence as a number of well-known actors and actresses have reportedly successfully followed an egg based diet, although we cannot find the exact diet they would have used.

However, an approximate meal plan for the day would suggest, although low in both calories and carbs:

Breakfast: Either 2 hard-boiled eggs or scrambled eggs with half a grapefruit.

Old advice to limit eggs to just a few each week has been abandoned. According to the Food Standards Agency in the UK, there’s now no limit to the number of eggs you can eat in a week as part of a healthy balanced diet. Previous advice may have been caused by a lack of understanding between dietary cholesterol and blood cholesterol. Nevertheless,   please bear in mind the high levels of cholesterol in an egg. 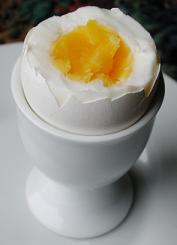 According to the US Department of Agriculture Nutrient Database, a single large 50g hard-boiled egg contains 186mg of cholesterol. Now according to the US Food and Drug Administration (FDA) the average cholesterol limit for both men and women is 300mg daily. There is little evidence however that eggs increase our bad cholesterol levels. The Harvard Medical School has published studies suggesting men can safely eat seven eggs per day. It’s advised though, that if you suffer from diabetes, to limit your egg intake.

How many calories in eggs? Each hard boiled egg contains just 76 calories. So whilst they are low in calories, they are high in cholesterol.

The International Journal of Obesity published research findings in 2008 about how eggs can affect weight loss. In a study of 152 people between the ages of 25 and 60, with a BMI of greater than 25, participants were split into 4 groups. Two different groups had an egg based diet, and the other two groups had a bagel based diet. Of these 4 groups, 2 were calorie restricted, and the other 2 were not. The egg groups eat 2 eggs containing 340 kcal for breakfast. After 2 months the study concluded that an egg based breakfast does increase weight loss only if part of a calorie restricted diet, i.e. introducing eggs as part of the diet increased the weight loss. However, it also showed that when eggs were introduced into a non-calorie restricted diet, no weight loss was noted.

Protein and Vitamins in Eggs:

Whilst eggs are not high in protein when compared to some other foods, nutritionists praise the quality of the protein, given the eight essential amino acids they contain. We’d recommend only purchasing free range or organic eggs. Standard commercial eggs or eggs from battery farms may be deficient in vitamin B12, and other nutrients.

How to Cook Eggs:

One egg in 10,000 is contaminated with salmonella, so you should never eat undercooked eggs. Eggs are not cooked properly if they have runny parts.